Ever since the Israeli occupation authorities ceased control of Eastern Jerusalem, it spared no effort to enforce its Judaization Project on the city. To achieve this it implemented several procedures, the most alarming of which were the settlements’ expansion within the city and the efforts to impose the Judaization of Al-Aqsa Mosque by all means possible. These policies are no secrets, the occupation authorities declared their intentions in this domain several times through statements issued by some of its government officials and various religious figures. The ultimate intention is nothing less than the obliteration of Al-Aqsa Mosque and building the so-called temple on its ruins.

To reach this goal extremist Jewish individuals and groups have committed a series of violations in the holy site. As early as 1969 there was an attempt to burn down Al-Musalla al-Qibli* (The southern building of the mosque) and it was shortly followed by excavations beneath the mosque’s site which continue to this day and which threaten parts of the mosque with collapse.

Guarded by Israeli security forces, a number of Israeli ministers and MPs, groups of Jewish extremists sometimes led by bigoted rabbis, and Israeli soldiers in full military uniform repeatedly break into Al-Aqsa Mosque, going on “tours” around the holy compound’s plazas, performing religious rituals, and ranting provocatively about the necessity of building the so-called temple. This is all done to enforce the notion that they have the true right to the place and to create a new de facto situation. It must be reiterated that all this takes place under the escort of Israeli security forces.

Some voices between those radical groups have raised the demand that Israeli authorities, courts, and the Knesset must grant Jews the freedom to enter into the mosque complex and perform their prayers in it, some have even demanded that it is the Muslims who must be banned from entering the mosque! There also has been some demands that a division of the site, similar to that which took place in the Ibrahimi Mosque in Hebron, must be enforced. But this would only serve as a prelude for ceasing full control over the site, also similar to what happened in the Ibrahimi Mosque.

To ensure that the freedom of the occupation authorities’ hand in their violations against Al-Aqsa Mosque some Israeli MPs called for ending the Hashemite custody over the holy sites in East Jerusalem, a task overseen by the Islamic Waqf in Jerusalem under the supervision of the Jordanian Ministry Of Awqaf And Islamic Affairs.

Beside these actions on the ground, Israeli authorities have been using its misleading media to create confusion and to show the world a distorted image of what Al-Aqsa Mosque actually is. So you find only images which only focus  on parts of the mosque such as Al-Musalla al-Qibli* and the Dome of the Rock on their own in an attempt to depict that those buildings form the entirety of the mosque compound. This presentation deliberately neglects showing full images of the mosque with all of its various features to give the impression to watchers –particularly foreigners- that if it violates any of the parts not shown in those pictures then it is not actually committing any violation of Al-Aqsa Mosque itself.

As showing only Al-Musalla al-Qibli* or the Dome of the Rock as the only images of Al-Aqsa Mosque is a grave distortion of the true image of the holy site, The Royal Committee For Jerusalem Affairs maintains that unveiling this deceit and pointing out this serious error -which even some well-intending Arab and Islamic media fell into- is of the utmost importance for the defense of the cause of Jerusalem and the preservation of Al-Aqsa Mosque.

Al-Aqsa Mosque as mentioned at the beginning of the Surah of the Night Journey (Al-’Isra’) in Holy Quran in Allah’s saying: “Glory to ((Allah)) Who did take His servant for a Journey by night from the Sacred Mosque to the farthest Mosque, whose precincts We did bless,- in order that We might show him some of Our Signs: for He is the One Who heareth and seeth (all things)”[1] is the totality of the 144,000 m2 and defined by the mosque walls. This includes the gates of the mosque, several buildings including Al-Musalla Al-Qibli*, the old mosque, the Dome of the Rock, the Buraq Mosque, the women’s mosque, and Al-Musalla Al-Marwani in addition to 14 domes, 4 minarets, 12 schools, 8 arcs, and a number of fountains and niches and wells and a western and southern colonnades. So the Dome of the Rock and Al-Musalla Al-Qibli* are merely important edifices of the mosque and do not represent its entirety.

Al-Musalla Al-Qibli* is the large mosque building standing in the southern side of Al-Aqsa Mosque compound, it is called so because it stands in the direction of Al-Qiblah (direction of Mecca). Its construction in its current form was commenced by the Umayyad Caliph Abd Al-Malik Ibn Marwan, the building was completed during the reign of his son, Al-Walid Ibn Abd Al-Malik. Again, this edifice is a part of the blessed Aqsa Mosque and must not be referred to as Al-Aqsa Mosque itself.

As for the Dome of the Rock, it is one of many domes within the mosque compound, but it is doubtlessly the largest and most beautiful among them. This edifice stands in the middle of the mosque, beneath it there is the Mosque of the Honored Rock. It was also built by Abd Al-Malik Ibn Marwan. Although it bears witness to the Arab and Muslim identity of the place, and although it is a masterpiece which has always captured international attention, it is still merely a part of Al-Aqsa Mosque, it does not define the mosque in its entirety.

Therefore, the part must not be presented as the whole. The Dome of the Rock on its own or Al-Musalla Al-Qibli* on their own are not the whole of Al-Aqsa Mosque. If Arab and Islamic media is to truly help the cause of Al-Aqsa Mosque it must present the whole complex with the entirety of its 144,000 m2 area as Al-Aqsa Mosque. This would instill the true image of the place in the consciousness of the Arab, Islamic, and even foreign watcher. This would confirm that the mosque is an integral whole and no part of it replaces the whole. This would frustrate Israeli attempts to slowly and invisibly Juadaize the place while our attention is captured by the preservation of parts of it. 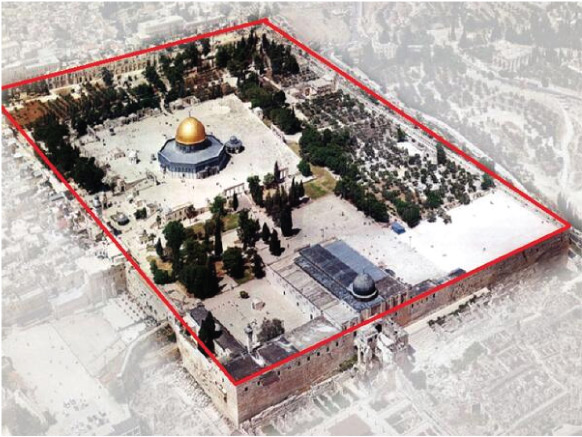